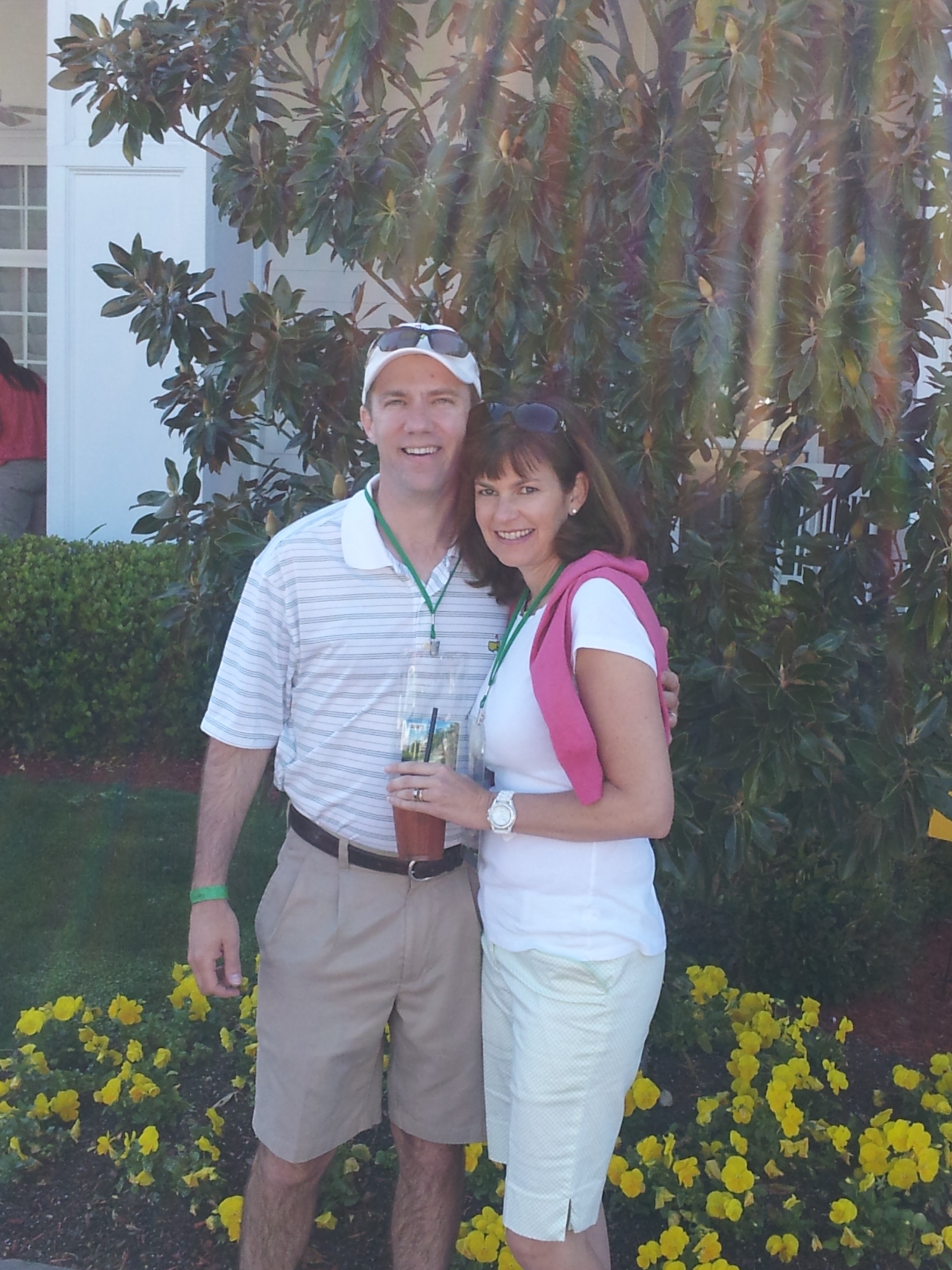 Nothing epitomizes spring more than the iconic tradition known as The Masters. Held in the quaint, southern town of Augusta, Georgia, The Masters symbolizes everything southern….hospitality second to none, a measured pace of life, and most of all: breathe taking beauty!

On April 8, 2012, at 8:10am, my wife and I entered gate 6 of Augusta National. Easter Sunday at the Masters: Heaven on earth! Molly and I marched straight to hole 16 and placed our two chairs for the day.  One of the wonderful traditions of the Masters is the sacredness of the chair placement.  Once a chair is put down, it won’t be moved or touched.

Molly and I meandered up and down the hills and valleys and under the towering Loblolly pines of Augusta National soaking in all the beauty. Not a blade of grass out of place.  Every breathe was full, and every step was relaxed and un-hurried.  As the day warmed up, the competition of the tournament did as well.

Giant roars could be heard from all corners of the course: the first of which shook the earth immediately after Bo Van Pelt carded a hole-in-one. Not long after Van Pelt’s ace was a second roar that was a crescendo of oohs and aahs that burst into an eruption of excitement, which seemed to last for an eternity.  Louis Oosthuizen did the near impossible: a double eagle (AKA, an albatross).  For those non-golfers out there, a double eagle is achieved by holing out the second shot on a par five.  This feat is considered much harder, and statistics prove it to be so, than a hole-in-one. So far we were in the wrong place for both great shots and missed them both, but the day was not over.

We made our way around the course to see all the must-see locations.  We sat in the bleachers at Amen Corner, I showed Molly where Phil carved his second shot from the trees on the par 5 13th back in 2010, we watched our home-town hero (Brandt Snedeker) tee off on hole number one, we bought traditional Masters food (Yes, still the most inexpensive sports concessions anywhere), and Molly received a knuckle bump from her Irish brethren Padraig Harrington.

Speaking of Molly, this is a not an event I simply drug my wife to. This is an event that is near and dear to her heart, as well. She grew up gathered around the TV on Masters weekend with her family. This meant as much to her as it did me…..if not more.  She relished every moment.

After making our way around the course, we decided it was time to head back to our chairs at 16 (of course they were still there and untouched) and watch the leaders navigate this tricky par 3.  We saw Tiger hit it long.  We saw Matt Kuchar bogey after the crowd cheered him on as he approached the green….all shouting his signature cheer “Kuuuuuch”…sounding oddly like boos.   We watched 8 or so groups play through 16. We chatted with folks from all over….folks from South Africa, Australia, United Kingdom, and even some folks from here in the states.

At 16 we got our money’s worth.  We watched Adam Scott stand on the tee ready to hit his approach.  His languid swing sent his ball high in the air landing softly some 15 feet short of the hole. The crowd began to sigh as the ball rolled towards the hole.  The ball disappeared into the bottom of the cup, and the crowd erupted.  We saw a hole-in-one on Masters Sunday!

After the cheering finally stopped we watched the final couple groups come through, including Bubba Watson and Louis Oosthuizen.   Bubba birdied 16 to grab a share of the lead.  Game on! We scampered to the 18th green to get a view for the finish.

Molly and I stood in a sea of people on the 18th green and watched Bubba and Louis hit their approach shots. The pressure was mind-bogglingly thick.  It’s really quite amazing that a crowd that large can become deafeningly quiet.  While the players were preparing to swing, you could hear a symphony of nature.

We watched the first play-off hole, which was played on number 18 again. Again, they tied and moved to hole number 10. Molly had our fill of large crowds and headed for the hospitality house, which was a great way to cap off the day.  We watched the highlights of the last few holes in regulation and then the amazing shot Bubba executed on the 2nd play-off hole to win the green jacket.

What a day! We were on the course the entire day….enjoying every minute. I can’t describe the experience any better than simply to say it was “perfect.”

Alright, so I bet you are now wondering what all this has to do with financial planning? Well, for my type of planning, it has a lot to do with it. Our little trip down to Augusta was not cheap, but I can assure you it was more than worth it.  Molly and I created a memory we will carry forever.   The money we spent was one of the best investments I have ever made.

So, while we all need to make sound investments and focus on tomorrow, this blog post is simply a follow up to my last post……think of it as a living example. Making memories with family and friends is always a solid investment!  Good planning, hard work, and balance is needed to walk through this crazy world in which we live. Again, this post is not a prescription to run up your credit cards on fancy cruises, crazy travel, or on a TV the size of king size bed..…it’s simply about perspective. We need to create balance between today and tomorrow.

Knowing the purpose of why you save money will help you know where to spend it.  Hapless spending will leave you feeling empty and frustrated.  Focus spending on the things that bring you joy. I did, and it was simply perfect!