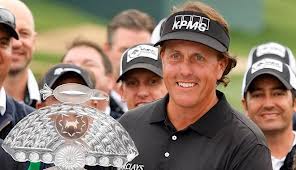 This past weekend marked Phil Mickelson’s (AKA Lefty) 41st PGA tour victory. He confidently won the Phoenix Open by four strokes over Nashville native Brandt Snedeker.  Interestingly enough, Phil had not played well leading up to this event, but Phil’s poor play was not the only topic the media was discussing prior to last week’s victory.

A couple weeks ago, Phil made some comments about not playing as much golf or keeping his homestead in California due to high tax rates.  This, obviously, caught my attention.  Phil was slammed by the media and certainly didn’t receive any sympathy for his thoughts.  But, again, the incident gave me pause to think.

To most folks Lefty’s loaded. He’s got plenty of money, so why should he care about paying more in taxes?  Does it really matter if he brings home 10-15% less this year?  Heck, he just won a little over $1.1M for his work last week….not bad.

After some thought on the topic, I found there are three lessons we can take away from Phil’s situation.

Everyone cares about money (even when you have a lot!)

It’s all relative. Some folks would say Phil’s selfish and shouldn’t be crying about paying more in taxes because of what he does have.  But, what if he wants to earn more to have the ability to give more to charity? My point is not to debate the political, socio-economic, or wealth side of the issue. It is simply to say everyone has money problems to some degree.  Those who make $50K a year may feel folks earning $200k are really knocking it down, while those earning $200K a year may feel strapped.  Again, it’s all relative.

It’s not what you have, but what you do with it, right?  Whether you earn $500 a week or $500,000 a week, it’s important to plan how to handle what you do have.  One of the most common issues I see with new clients is simply a lack of proactive planning.  I’ve said it before, and I’ll continue to say it: Taxes are the single largest recurring expense that most of us will face in our lifetime. Yet, most of us simply ignore it and hope for the best when it comes time to prepare a tax return.  That’s a recipe for disaster at any income level.

We’ve all heard it before: money can’t buy happiness.  A study published in 2010 by Princeton University showed that happiness from everyday experiences didn’t improve once income reached $75,000.  Interesting?   You can read a full version of the study here.

While I’m not implying that Phil is unhappy, I do think we can learn from his situation. Do you think Phil’s happiness revolves around how much money he has?  Do you think Phil plays more golf because he needs more money?  I would bet no. While I certainly can’t speak for him, I would imagine that Phil has many things he still wants to check off of life’s to-do list.  Those items on Phil’s list are what keep him going. I doubt it’s about the money itself.  There may be a component to his goals that money connects to, such as giving more to charity or his foundation.

It’s all relative to how we think.  More money doesn’t always equal more happiness.  By focusing on areas that bring happiness, we can strive to reach a fulfilling life while keeping a healthy relationship with our money.

The next time I stand on the 18th tee and contemplate that $2 Nassau bet with my buddies up at the club, I’ll try to keep it in perspective.  If I hit it in the bunker on the left or stripe it down the middle, the end result is always the same. It’s always about the connection (or as my buddy says, the fellowship) with those I care about and not about the money…..well, maybe that’s not entirely true. I’m much happier if I can take a couple bucks off of my friends’ hands….more importantly, it’s about beating the snot out of ‘em….just like Lefty!